Cluster of Research Excellence in Culture, Creativity, Health and Well-Being

We seek to provide a valuable experiential learning model for artist-scholars, educators, and cultural activists ​committed to legitimizing the health benefits of cultural practice; exploring the political implications of collaborative research in a multicultural context; and developing decolonizing approaches to arts-based pedagogy that can contribute to the ​health and well-being of culturally diverse communities.
https://research.ok.ubc.ca/research-excellence/research-clusters/cchb/ 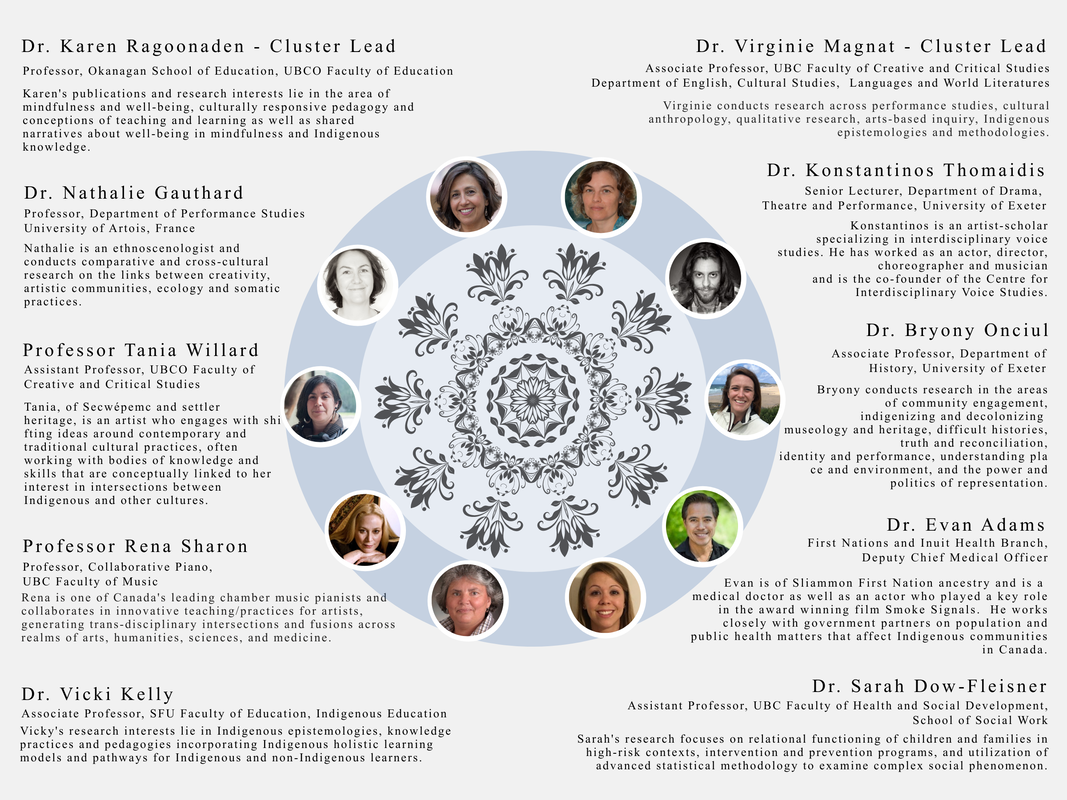 In the post-Truth and Reconciliation Commission era, it is crucial to integrate the perspectives of Indigenous scholars and artists who foreground the cultural, spiritual,
​and environmental dimensions of health and well-being.

​Our international research cluster hence responds to the urgent need to acknowledge and to include multiple ways of knowing and being to decolonize Eurocentric paradigms that still inform dominant knowledge systems in the academy.

​Our research is guided by the interrelated concepts of kindness, compassion, attention, and intention associated with holistic understandings of health and well-being in the field of education (Ragoonaden 2017, 20-21). As noted by Jon Kabat-Zinn, “sages, yogis, and Zen masters have been exploring this territory systematically for thousands of years; in this process they have learned something which may now be profoundly beneficial in the West to counterbalance our cultural orientation toward controlling and subduing nature rather than honoring that we are an intimate part of it” (1994, 3). Our goal is to establish connections between holistic performance training and mindfulness practice to develop an interdisciplinary approach guided by the Indigenous principles of respect, reciprocity, and relational accountability (Wilson 2008) that bind individuals to a place-specific conception of community/environment. This is reflected in the Medicine Wheel in the form of a circle or spiral that “symbolizes unity, wholeness, continuation, perpetuity, inseparability, completeness, balance, security, equality, comfort, and health” (Loiselle and McKenzie 2006, 11).

Highlighting the “precarious vitality of arts-based health research,” Canadian scholars Susan M. Cox et al. issue a compelling call to develop interdisciplinary partnerships, national and international networks, as well as education and training opportunities “in the spirit of discovering the vast and largely untapped potential for creative exploration of the role of the arts in health in Canada and elsewhere” (Arts & Health 2010, 121-122). The pressing need for active support of research in the field is also identified by Arts Health Network Canada in a report stating that “when compared with initiatives in the United Kingdom, the United States and other Western countries, it is evident that Canada is well behind in benefiting from the contributions the arts can make to health and well-being ─ 10 to 40 years behind” (Status of the Arts and Health in Canada 2010, 5).

Drawing from our collective expertise, our Cluster mobilizes existing partnerships connecting universities in Canada, the U.K., and France to design, develop and implement arts-based and community-engaged research projects that have the potential to promote, enhance, restore, and sustain health and well-being. The Cluster seeks to engage Indigenous, settler, and Immigrant communities in non-colonial forms of dialogue, exchange, and collaboration to contribute to current reconciliation processes in Canada.